As more details emerge about the recent Comcast customer service call fiasco, it has become clear that the company culture encouraged the customer service agent’s misguided behavior. It appears that Comcast pays its agents incentives to retain (and upsell) customers who want to end their contract.

Despite this explanation about the agent’s motivation, it isn’t difficult to feel frustrated—aghast, even—when listening to the way the customer is being spoken to. There is a fundamental lack of communication rooted in the opposing agendas of the customer, who wants to end his contract, and the agent who wants to prevent him from doing so. And if you think further about the situation, its ridiculousness lends itself to humor.

Human miscommunication, while inevitable and frustrating, can be very funny. Recently I stopped by a local café for brunch. I usually get the omelette special, but that day, it included an ingredient that doesn’t agree with me, so I asked the waiter if I could get the special without it. He said he’d ask the chef. A few minutes later, with no explanation, he delivered a plate with an omelette that bore no resemblance whatsoever to the advertised special. 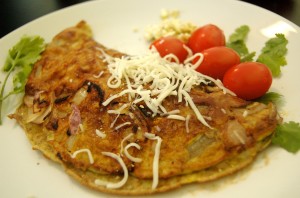 I thought this was perhaps someone else’s order, so I tried to get his attention. When he finally walked over, he explained that he had asked the kitchen for a completely different omelette for me because they couldn’t leave the ingredient out, it’s mixed in at the prep stage. It bears without saying this waiter was very new (I’d never seen him before) and was nervous and confused.  He offered to get me something else, but I was hungry and decided the easiest thing to do would be to simply eat the omelette he had selected for me.

When it was time to pay the bill, I couldn’t get his attention. I finally walked up to the cashier, who said they had decided that they wouldn’t charge me. She was surprised he hadn’t informed me, and she apologized, saying she had no idea what he was thinking when he ordered without checking with me first.

Walking home that day, I couldn’t help but chuckle at the situation. The waiter’s resemblance to Seth Rogen was a factor, but the assumptions he made and his decision to not communicate them with me were just comical at that point. It reminded me of the Olympia restaurant Saturday Night Live skit with John Belushi and Dan Akroyd, in which no matter what you ordered, it was translated into a “Cheeseburger, Cheeseburger, Cheeseburger,” and maybe “Chips, Pepsi!”—but at least at the Olympia restaurant, they told you upfront that’s all you were getting!

Another hilarious example of customer service (or the lack thereof) is the recurring skit Women to Women bookstore on the hit TV show Portlandia. The skit mines the impossibility of clear communication in the unique universe inhabited by the bookstore’s owners, Toni and Candace, who routinely harass hapless visitors to their store and grill them about rules only Toni and Candace are aware of.