Sightseeing in my backyard: Lyndhurst

After living in the Westchester area for the past couple of years, I became curious about some of the historic and cultural sights here. I started doing some research in January of this year and learned that most of them are only open from April/ May until November/ December. 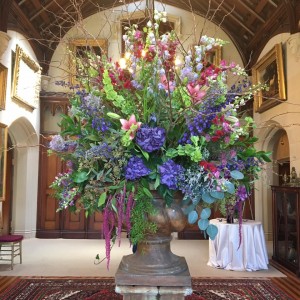 Our first excursion in May was to the Flower Show at Lyndhurst, a 19th century Gothic Revival historic house overlooking the Hudson River in Tarrytown. Beautiful floral arrangements were artfully dispersed throughout the 19-room mansion.

Photography is allowed inside Lyndhurst, unlike most of the historic mansions in the area.

Former owners include Jay Gould, the railroad magnate, who bought the mansion in 1880 as a summer retreat. When he passed away in 1892, his daughter Helen maintained the property until her death in 1938. Helen’s sister Anna then took over until she passed on in 1961, at which point the mansion became part of the National Trust for Historic Preservation. 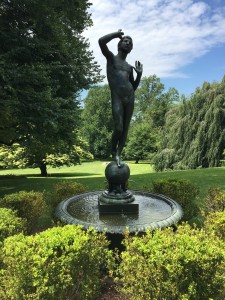 After touring the mansion, we walked the grounds of the estate, enjoying the view of the Hudson. The 19th century’s Romantic ideals and appreciation of nature are reflected in Lyndhurst’s sweeping landscape, including evergreen trees, statues and fountains. One of the mansion’s previous owners named it ‘Lyndenhurst’ after the many namesake trees planted on the estate.

We visited on a chilly, windswept day, and I couldn’t help but wonder what literary gem Emily Brontë might have been inspired to write had she visited Lyndhurst.

During this first visit, I also learned that Lyndhurst’s beautifully landscaped grounds are dog friendly, including the Riverside walk, with an entrance at one of the corners of the property. The walk is about a half mile and is part of a planned 51 mile Westchester county riverwalk.

On a subsequent visit, I discovered a charming waterfall on the Riverside Walk:

There are several exhibitions throughout the Spring, Summer and Fall at Lyndhurst, and I plan on visiting again to see Defying Labels: New Roles, New Clothes and the Halloween Mansion Tour.