My day tweeting for the United Nations

My friend Vendula, who has worked for the Department of Public Information (DPI) at the United Nations in various capacities, asked me to volunteer for the social media team at the 65th UN DPI/NGO Conference, which took place on August 27-29 at the UN Headquarters in New York City. I was curious about the conference and how a team would cover the various sessions so I said yes.

The Conference brought together more than 2,000 international representatives of Non-Governmental Organizations (NGOs.) It was comprised of several roundtables and workshops over three days. I was assigned to the second day, so I watched the opening session from home via live stream, and I also perused the website to familiarize myself with the #Post15 conference agenda, also known as #SDGs (sustainable development goals.) The topics covered included:

At the end of the opening session, I enjoyed an unexpected performance by talented Korean pop star Lee Seung Chul, who performed two songs. Here is his rendition of “Bridge Over Troubled Water:”

When we arrived at the UN Headquarters on the morning of August 28, Vendula and I found our reserved media seats in the conference room where “The Resource Nexus: Food, Water and Sanitation, Energy” session was taking place. As we settled in, I sent out a tweet; it was exciting to see it on the big screen: 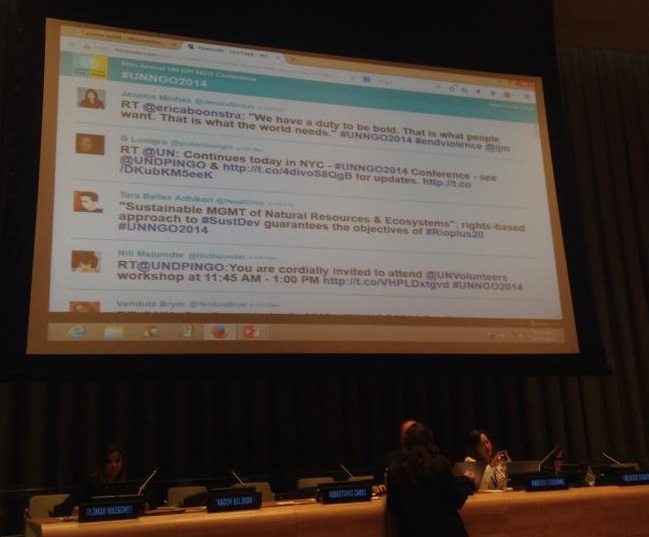 This session focused on food, water and sanitation, and energy. Combined they are considered the “resource nexus” at the center of sustainable development. The goal of the resource nexus is poverty eradication, which is linked with sustainable consumption and production patterns. This relationship must be managed carefully to avoid resource scarcity and conflict. 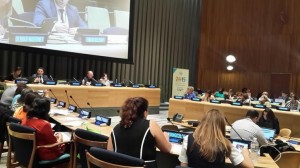 Volunteers had been asked to download  WhatsApp (a cross-platform mobile messaging app) ahead of time. A general group was created to disseminate information to the team, then subgroups were created based on the conference sessions. As volunteers, we felt comfortable knowing that we were not tweeting live and that the social media team would be reviewing our work before posting messages on official social media channels.

The majority of the social media messages we crafted were for Twitter. It’s fun to listen for good soundbites during a live event, then tweet the quote out, including the speaker’s Twitter handle (compiled before the sessions started.) We added the general conference hashtag #UNNGO2014 to our WhatsApp text messages. Some sessions had their own hashtags, so we included those too. We enjoyed seeing our WhatsApp messages in the official Twitter feed, and we retweeted them from our personal Twitter accounts.

When the opportunity arose, we crafted longer social media messages with some context and background for Facebook. The social media team had also crafted messages ahead of time based on the speeches they had received prior to the conference. 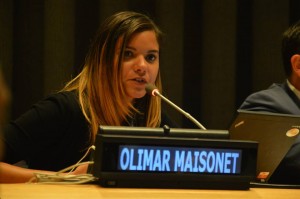 Meanwhile, volunteer professional photographers were uploading high resolution portraits of various speakers to WhatsApp. The social media team uploaded them to Instagram and combined the text we had written with the portraits of speakers for Facebook.

The social media team curated all our WhatsApp messages, making sure to give equal time to all the speakers and in some cases combined our messages to avoid duplication.

The next session I had been assigned to was a workshop on “Social Media, Surveillance and Information Wars: Egypt, Tunisia, Ukraine.” The workshop focused on the value of social media for organizing and communicating during protests. The speakers shared surprisingly candid stories about uprisings against repressive and authoritarian regimes in Egypt, Tunisia and, most recently, Ukraine. Speakers included Jennifer Preston, New York Times Reporter on the International desk for Ukraine, Egypt, Tunisia, Turkey and Victoria Baranetsky, First Amendment Fellow at the New York Times Company.

At the end of the closing session,  Maher Nasser, Acting Head of the UN Department of Public Information (DPI) said that  the #UNNGO2014 hashtag received 3.6 million social media impressions on the first two days of the conference.

Volunteering for the United Nations was a great experience. Like an insider, I attended a roundtable and workshop, listening to speakers I would normally not have access to. Their stories were fascinating. I also enjoyed learning how the DPI social media team handles live events. While they have been criticized for being a bureaucratic entity whose unwieldy size slows down taking action, the UN fosters communication and collaboration, and they work to make the world a better place for all of us. I am glad I was asked to be part of their efforts for a day.