“The way to a man’s heart is through his stomach.”

Unlike many quotes attributed to “anonymous,” which in many cases were first said by women, this well-known saying is attributed to Fanny Fern (née Sara Payson Willis). It is curious that Fanny Fern is not very widely known today, considering her extraordinary accomplishments as the first woman newspaper columnist, and the highest paid 19th century American newspaper writer.

Sara Willis was born on July 9, 1811 in Portland, Maine. Her father Nathaniel Willis, a strict Calvinist deacon, was described as sober and lacking in imagination. Sara described her mother, Hannah Parker, as the source of all poetry in her nature. It is very likely that Sara’s strength of character was nurtured by her mother’s warm and cheerful personality.

Deacon Willis sent Sara to study at Catharine Beecher’s Hartford Female Seminary in New Hampshire when she was 16. The school’s strong religious component appealed to her father, who hoped Sara’s rebellious spirit would be curbed. (It wasn’t!) The seminary provided what was arguably the best education for a woman to receive at the time, emphasizing the development of students’ ideas over rote memorization.

When her first husband died of typhoid fever in 1846, Sara’s father and her in-laws did not want to support her and her two children. She tried her luck at being a seamstress, one of the only respectable positions available to women, but could not make ends meet. She also attempted to secure a teaching position, but was not successful. At her father’s insistence, Sara embarked on a marriage of convenience that ended in divorce. Because Sara left her abusive husband, the scandal further alienated her from her family and friends. In a desperate attempt to feed her children, Sara began writing articles for Boston newspapers in 1851. Shortly thereafter, her articles were read in newspapers nationwide and in England. By 1870, Sara’s columns were published in several newspapers with a combined circulation of nearly half a million readers, and she sold over half a million books.

Sara’s first book was a compilation of articles and columns entitled Fern Leaves. In order to protect her identity, Sara had adopted the satirical nom de plume “Fanny Fern.” The moniker may have led later audiences to believe she was a sentimental writer of the type criticized by Nathaniel Hawthorne as “that damned mob of scribbling women.” Although a few of Fern’s early articles were of a more sentimental nature, the bulk of her later work is not. Her acerbic writing style was labeled unfeminine and immoral, and her articles were controversial, but they were also widely read and extremely popular. Hawthorne praised Fanny Fern’s second book, the autobiographical novel Ruth Hall (published in 1855) saying it was worth reading precisely because when women writers “throw off the constraints of decency…then their books are sure to possess character and value.”

In 19th century America, women were praised for being selfless and passive. A long tradition of silencing women who did not conform to society’s expectations was also well established. A woman’s place was in the home, and even progressive thinkers like Ralph Waldo Emerson espoused decidedly patriarchal and limiting views on the role of women in society. In his address at an 1855 women’s rights convention in Boston, Emerson said women are “the civilizers of mankind…they embellish trifles.” 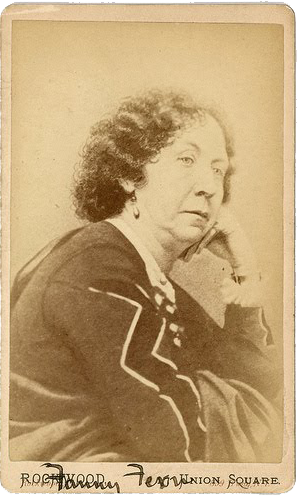 Fanny Fern wrote with humor about serious topics such as divorce, prostitution, birth control, children’s rights, venereal disease, and the need for prison reform. She was witty and abrasive, and developed her writing style as an irreverent and iconoclastic satirist. Her most passionate argument was about the necessity for women to have and control their own money. When she married her third husband, James Parton, they had a prenuptial agreement that stipulated that Sara was the owner and retained control of all copyrights for all articles and books she wrote.

Sara’s success meant she had to defend her name and style of writing on many occasions. The sloppy editorial practices at the time probably contributed to misattributed articles. The scant enforcement of copyright protection and the practice of exchange publication also added to the confusion. The courts ruled in Sara’s favor, but the legal system hadn’t caught up with Sara’s astonishing accomplishments: in court documents she was listed as Mrs. James Parton. In other words, she had to get her husband’s full consent and cooperation in order to file suit!

In her biography Fanny Fern: An Independent Woman, Joyce Warren states that Fanny Fern’s work “remained out of print for over a hundred years and has been absent from anthologies and college syllabi as well.” Warren points out the irony that Fern was “criticized by her contemporaries for her ’unfeminine‘ writing while 20th century critics disparaged her work because they regarded it as too feminine…up to the present day the revolutionary content of her work has been ignored.”

Modern audiences might be less inclined to ignore Fern were they to delve into her prolific body of work. In an article published in New York Life on August 8, 1867, Fern empowers women to value their voice: “I look around and see innumerable women to whose barren, loveless life [writing] would be improvement and solace, and I say to them, write! Write if it will make your life brighter, or happier, or less monotonous. Write! It will be a safe outlet for thoughts and feelings…[L]ift yourselves out of the dead level of your lives…Fight it! Oppose it, for your own sakes, and your children’s! Do not be mentally annihilated by it.”

It’s possible that had Sara been more politically active in the women’s rights movement, her inspiring words and refusal to be silenced would have earned her a more prominent place in our nation’s history. Sara believed financial independence for women was essential to women’s rights, and that when women had their own money, they “may rightfully demand — even the right to vote as vote you certainly will someday.”