The article below is a guest post by Tekla Szymanski, and also appeared previously on the New York Women in Communications blog Aloud. 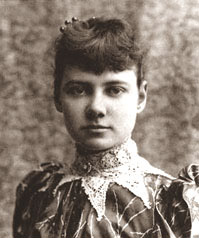 Long before the 1970s, the golden era of investigative journalism, when all those cool male undercover reporters made long-form reporting fashionable — there was Nellie Bly. She was the pioneer in investigative reporting. She was a woman. And the year was 1880.

Bly was born in Pittsburgh on May 5, 1864, as Elizabeth Jane Cochran. Known as the “most rebellious child” in the family — maybe because of her curious mind and her wit — she dared to dream of becoming a writer at the Pittsburgh Dispatch, whose star columnist Erasmus Wilson (and most probably all of the readers agreed with the man) believed that a working woman was “a monstrosity.” Elizabeth (who knew many women in her hometown who needed to work in order to survive) wrote an angry letter to the editor after reading the columnist’s tirade and was hired on the spot. She took up the pen name Nelly Bly (from the title of a Stephen Foster song) and went to work. True to her motto “energy rightly applied and directed will accomplish anything,” she wrote about social ills, the plight of poor factory girls and their struggle to get by and the need for reforms in the state’s divorce laws. Yet, time and again, the editors assigned Nellie to the women’s pages, to write about flower shows and fashion and fluff.

But Nellie craved the real stories, and she prevailed. She became the paper’s foreign correspondent in Mexico. And off she went, filing story after story. Upon her return, however, she was back writing fluff. “I was too impatient to work at the usual duties assigned women on newspapers,” she’d later say. She quit and went to New York. 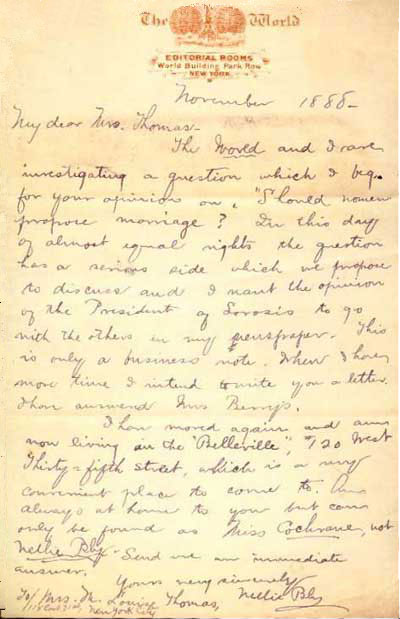 I imagine sitting with Nellie in a coffee shop close to her home at 15 West 37th Street, where she lived while working for the New York World and the New York Journal. I imagine we’d compare notes how far women journalists have come in the past 100 years. And yet, she would be astonished to hear that women are still fighting an uphill battle for equal pay, equal representation and recognition and positions of power. She’d be appalled to learn that women were admitted as members into the National Press Club only in 1971. She wouldn’t recognize the term “glass ceiling,” but she would instinctively understand.

We’d list the condescending remarks that we’ve encountered throughout the years, a career woman’s need to be better than the average man. We’d chuckle how being too pushy as a female reporter makes us “bossy” and being too timid a “wuss.” Nellie would realize that she found her voice but that many women after her, for many years to come, lost theirs. I’d tell her that today, 43 Percent of women still work in low-paying, “pink collar” jobs. And she would be saddened to hear that her kind of investigative journalism was declining, all because of an ever shrinking bottom line in an ever shrinking pool of newspapers, and that the long-form, narrative kind of journalism that she so loved is too time-consuming for today’s average reader to digest.

She’d tell me how she went undercover for the New York World, impersonating a mad person; she was hospitalized for 10 days in an insane asylum on Blackwell’s Island in New York City and wrote an exposé about the beatings and cruel treatments she had witnessed and experienced herself. “It is only after one is in trouble that one realizes how little sympathy and kindness there are in the world,” she wrote. Her story led to real reforms. She was 23 years old. Then, in 1889, she traveled around the world to beat Jules Vernes’ protagonist in “Around the World in Eighty Days.” She succeeded, clocking in at 72 days, 6 hours and 11 minutes. She profiled anarchist Emma Goldman and suffragist Susan B. Anthony, whom she considered “all that is best and noblest in woman. She is ideal, and if we will have in women who vote what we have in her, let us all hope to promote the cause of woman suffrage.” 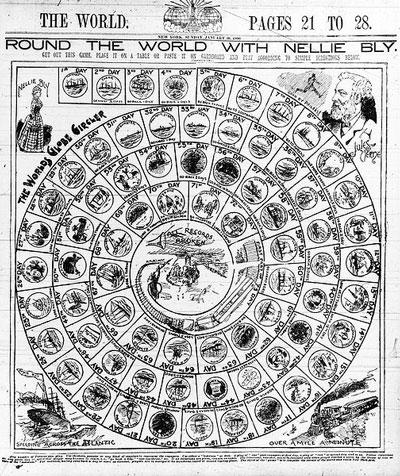 Later, trapped in Europe during World War I, she became a war correspondent. Back home, she continued to expose corruptions, shady lobbyists and politicians, the plights of the downtrodden, how women prisoners were treated by the police and the lack of health care for the poor. And I imagine how distressed she’d be when she hears that millions in this country are still lacking health care today. When we part, she’d say, “I have never written a word that did not come from my heart.”

Nellie Bly died in 1922, at the age of 57. I wish we could bestow upon her posthumously the New York Women in Communication’s MATRIX Award. If anyone deserves it, it is her. Because she worked in a hostile environment and made her mark against all the odds; because she had no footsteps to follow, yet had the guts not to give in when things got tough.

I wish I could meet her to thank her for that.

PBS Documentary “Around the World in 80 Days”
“10 Days in a Mad House” by Nellie Bly
Nellie Bly, the Pioneer Woman Journalist
Nellie Bly’s articles to download