As a child, I didn’t spend a lot of time thinking about food or dieting. My mom was (and still is) a great cook, and my sisters and I grew up eating a very healthy, mostly Mediterranean diet. Inspired by my mother’s love of food and skill as a cook, I added to my repertoire of favorite family recipes and continued to eat a well-balanced, healthy diet into my adulthood.

My early adult years were spent as an office worker, and I started to feel the effects of sitting at a computer for most of the day, so I explored training for and participating in triathlons as a hobby. This enjoyable physical activity successfully countered the effects of being a sedentary office worker for a few years.

I still swim and ride my bike regularly, and while I can’t run anymore, I walk my dog most days and also go for long walks when the weather permits. In other words, I continue to be a fairly active person, even if my body had to adjust to much lower levels of activity when I stopped participating in triathlons.

A few months after I stopped participating in triathlons (and training for them) I noticed that I was gaining weight. I tried several approaches to manage this development, including consulting with a doctor and a number of nutritionists. I was demoralized by the constant refrain that there is pretty much only one way to lose weight: count calories and let myself be hungry.

None of these practitioners seemed to grasp that I was eating what most would consider a healthy diet, but I was still gaining weight and often felt hungry.

The difficulty of finding a long-term solution loomed large. Most conventional approaches I had tried seemed to help for a short time, but I knew in the long run I would not be able to stick with them.

One day in early 2016, I read a Washington Post article about how a ‘one size fits all’ approach to nutrition and dieting does not work:

If you’ve ever tried out the latest diet fad only to find yourself gaining weight and feeling awful and wondered what you were doing wrong, scientists now have an explanation for you.

Israeli researchers, writing in the journal Cell this week, have found that different people’s bodies respond to eating the same meal very differently — which means that a diet that may work wonders for your best friend may not have the same impact on you.

Last January, during a conversation with a friend studying naturopathy, I caught a glimpse of an entirely different perspective about the health issues I was facing. I began working with her and when she reviewed my food logs, she said she was impressed with the high-quality food I was eating. She suggested I incorporate more protein at breakfast to help curb the hunger I often experienced. She also suspected I had a sensitivity to gluten and that I was having trouble digesting it. After a few weeks, I mentioned how frustrated I was that I was still the same weight, and she suggested I try a Paleo diet.

I researched Paleo, but at first I wasn’t convinced. I have known for some time that I feel better when I eat protein with every meal, but I am not a big red meat eater, and I still wasn’t sure about Paleo. I was also worried about having to give up grains, legumes and gluten foods for the long term.

A few months later, I decided to embark on a 30-day Paleo restart program. This program offers recipes for breakfast, lunch and dinner. Here are a few photos I took of the meals I cooked: 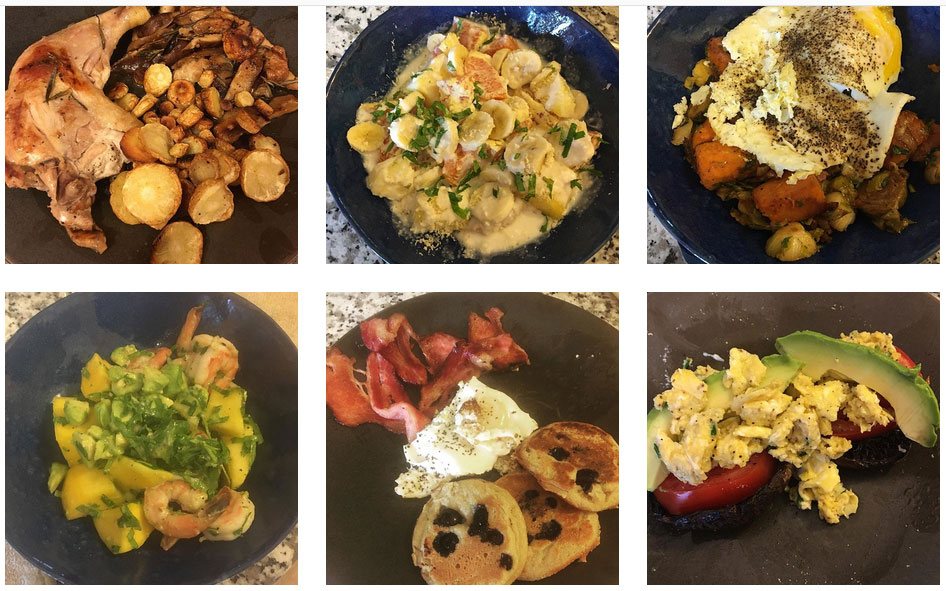 You can see more photos of my Paleo meals in my Instagram feed. I enjoy the variety of foods and vegetables in the recipes and have found a few new favorites, including some wonderful brunch recipes from Elana’s pantry.

It’s been about six weeks, and so far, I have noticed I do not feel bloated, nor do I have indigestion after meals. I have also lost a few pounds (I still have a way to go, but it’s been a good start.) I no longer struggle with feeling overly tired after eating, which is often a sign of sensitivity to certain types of food, such as gluten. In addition, I feel more energetic and more satisfied after meals.

I recently read a great piece in the New York Times: One Weight-Loss Approach Fits All? No, Not Even Close, an in-depth look at why it’s so difficult for some people to maintain a healthy weight. Sometimes, it’s because we try the wrong approach:

It makes as much sense to insist there is one way to prevent all types of obesity — get rid of sugary sodas, clear the stores of junk foods, shun carbohydrates, eat breakfast, get more sleep — as it does to say you can avoid lung cancer by staying out of the sun, a strategy specific to skin cancer…

“…Genetic disorders are rare. It is more likely that people inherit a collection of genes, each of which predispose them to a small weight gain in the right environment,” said Ruth Loos, director of the genetics of obesity and related metabolic traits program at the Icahn School of Medicine at Mount Sinai. “Scientists have found more than 300 such altered genes — each may contribute just a few pounds but the effects add up in those who inherit a collection of them,” Dr. Loos said.

I am not advocating that everyone should follow a Paleo diet at all, however going Paleo—avoiding gluten, legumes and grains and minimizing dairy and sugar—have all helped me enormously. I hope that by sharing my story, others might be empowered to find the solution to their own nutrition challenges.