Emma Lazarus: Poet of Exiles and the Statue of Liberty

When my grandmother set sail for America with her family in the early 20th century, she was a young girl who spoke only Italian. When they landed at Ellis Island, they would have clearly seen the Statue on neighboring Liberty Island. Even if she could have read the famous words inscribed on a plaque on the pedestal of the Statue of Liberty: “Give me your tired, your poor, your huddled masses yearning to breathe free,” she wouldn’t have known anything about the woman who wrote them. Today, most of us are familiar with “The New Colossus,” but we still do not know much about its author. Curious about the life and times of the woman who wrote one of the most famous sonnets in history, I decided that a visit to the Museum of Jewish Heritage to see their exhibit “Emma Lazarus: Poet of Exiles” was in order.

I took the ferry from Jersey City to see the exhibit in early 2013. The Museum of Jewish Heritage is located in Battery Park City, a little oasis on Lower Manhattan’s west side with lovely views of the Hudson River. The Statue of Liberty figures prominently anywhere you look. As I walked along the promenade, the winter afternoon’s silvery sunlight lent a mystical feel to my excursion. I think my grandmother would have enjoyed going with me if she were still with us. 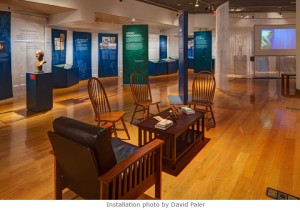 The exhibit had a well-lit and colorful, modern feel. Several panels in the beginning chronicled three generations of Emily’s ancestors in America. While she didn’t attend a formal school, Emma was very well read and educated, having access to her father’s extensive library. Several artifacts on display documented Emma’s relationships, including letters to and from one of her mentors, Ralph Waldo Emerson.

The middle of the exhibit included a salon area to illustrate Emma’s friendship with Richard and Helena de Kay Gilder. Emma’s vibrant social life and the Gilder’s salon brought her in contact with writers, artists and actors.

Partitioned off to the right, a looping documentary was shown on a movie screen, sharing “man-on-the-street” type interviews about the Statue of Liberty and immigration. The documentary also included sections with historians and biographer Esther Shor.

Emma was a successful literary author and poet in her day. Her writings span several genres, including drama, translation, novels, short stories, essays and poetry of course. She wrote regularly for American Hebrew and other periodicals.

When Emma learned about the Russian pogroms in the 1880s she began to write about the plight of Russian immigrants, speaking out vehemently against anti-Semitism. Despite derision from many corners, she was a staunch advocate for a Jewish homeland in Palestine.

Emma succumbed to cancer in 1887 while her famous sonnet was not yet a part of the Statue. Her friends had her words installed in the statue’s pedestal in 1903, sixteen years after her death.

I once interviewed my grandmother about her experience as a first generation immigrant to the U.S. I would have enjoyed telling her what I learned about Emma and her work, and I think she would have been fascinated by Esther Schor’s annotated and interactive version of Emma’s famous sonnet.

Emma Lazarus: Poet of Exiles was on display until March 10th 2013. A walking tour of Emma Lazarus’ New York is also available on a free iPhone and Android app. The walking tour is narrated by Juliana Margulies and includes Meryl Streep’s stirring reading of “The New Colossus.”

The poems of Emma Lazarus ebook