A couple of months ago I downloaded The New Yorker’s app “Goings On.” Naturally, the “Above and Beyond” listing caught my eye, which includes an exhibit at The New York Society Library (NYSL) titled “Edith Wharton’s New York City: A Backward Glance.” The exhibit opened in March 2012 to celebrate the 150 year anniversary of Edith’s birth.

It’s no secret that Edith is my favorite author, and although I haven’t made my way through her entire oeuvre, over the years I have found myself rereading some of her most celebrated novels, including The House of Mirth and The Age of Innocence. (I’ve also seen Martin Scorcese’s film version of “Innocence” and Terrence Davies’ version of “Mirth” more than once.)

In other words, I’m a fan of all things Edith Wharton.

I also have a thing for libraries, especially well preserved athenaeum types that recall genteel eras gone by. My first work/study assignment as a freshman in college was at the Michigan State University library, and I liked it so much I returned to a job there my senior year, albeit in a different department. 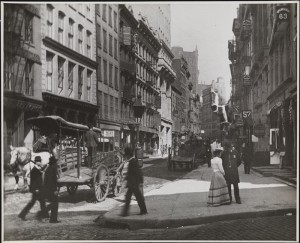 As you can well imagine, it wasn’t tough to extricate myself from my daily routine and schedule a field trip to the Upper East Side to learn more about Edith, and to visit what sounded like a lovely historical building housing a library.

While I was walking up to NYSL, who should walk out but an elderly man in a seersucker suit and straw hat with a grosgrain ribbon, looking like he just stepped out of an Edith Wharton novel! This was clearly an auspicious beginning for my field trip. I mean, people just don’t dress like that in the sixth borough (Jersey City) where I live.

I walked in and talked to one of the receptionists, letting her know I was writing a blog piece about the exhibit and asking if pictures were allowed. (They aren’t, because the items in the exhibit are on loan.) I walked up an elegant staircase to the second floor, catching a glimpse of a well-appointed members’ reading room to the left. The exhibit consists of a few glass vitrines containing photographs, letters, books and other memorabilia. Some of the items are on loan from Edith’s extended family, including Jonathan LeRoy King, whose father was Edith’s cousin Frederic Rhinelander King; from The Mount, Edith’s estate in the Berkshires; and beautiful first editions of The Age of Innocence and The House of Mirth, recently donated to the Library. 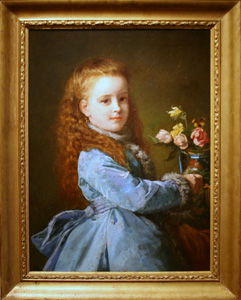 Head of Exhibitions Curator Harriet Shapiro stopped by to provide some helpful background on the exhibit. From Harriet, I learned that many items in the exhibit had never been seen before. Examples include a portrait of Edith as a child and several letters on loan from Rhinelander King. Edith’s sister-in-law, Mary (Minnie) Cadwallader Jones, also figures prominently in the exhibit. Minnie served as Edith’s close friend, researcher and literary agent.

The exhibit includes copies of the charging ledgers of the time periods when Edith’s father George Frederic Jones borrowed books. The logs reveal that Jones borrowed several novels, many in French, and that he enjoyed poetry.

Founded in 1754, the Library is the oldest cultural institution in New York City. It also functioned as the Library of Congress when New York was the capital of the United States. President George Washington, Vice President John Adams, Chief Justice John Jay, Alexander Hamilton and several members of Congress all borrowed books. 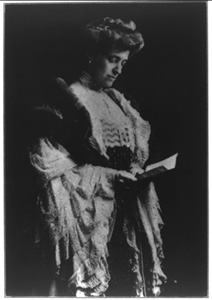 As its collections grew, the NYSL moved several times over the years. In 1937, it moved from 109 University Place, not far from Edith’s childhood home on West 23rd Street, to its current location in a 1917 Italianate Townhouse on 79th Street, between Park & Madison Avenues.

While compact, the NYSL’s exhibit provides a chance to delve deeper into Edith Wharton as a person, beyond her extraordinary talent as a writer. An exhibit catalogue with additional information is available for purchase. If you haven’t been to NYSL, the New York Times describes it best: “If old bookstores intoxicate you, you’ll need smelling salts when you walk down aisles of biography, history, fiction, art and other topics, average age measured not in years but decades. It is a temple to the hands-on book lover.”

Originally published on the New York Women in Communications blog Aloud. Connect with Giuliana on Google+