It’s unlikely we would be familiar with Zora Neale Hurston’s work today if it wasn’t for Alice Walker’s essay “In Search of Zora Neale Hurston,” which was published by Ms. Magazine in 1975. Zora was the most widely published female author during the 1930s Harlem Renaissance, but she was relegated to obscurity by the time she died in 1960.

In her time, Zora was mocked because she wrote character dialogue in the vernacular. Many accused her of reinforcing stereotypes, but more recently others (led by Alice, no doubt) have praised her efforts to bring a sense of authentic realism to her work. When I read Zora’s acclaimed 1937 novel “Their Eyes Were Watching God,” I found the dialogue took some getting used to, but the feminist themes and story felt modern and drew me in. Zora was a gifted writer with a knack for characterization that rings true.

The first essay that Zora wrote in 1928, “How It Feels to Be Colored Me,” contains one of the most controversial of her views: “Slavery is the price I paid for civilization, and the choice was not with me. It is a bully adventure and worth all that I have paid through my ancestors for it.” Her position drew heavy criticism both during her lifetime and beyond. While slavery was a horrific period in our nation’s history, Zora’s perspective was that in order for society to advance, it had to go through this dark period first. 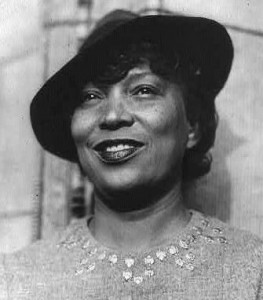 In an NPR interview, Alice says she never met Zora, but she was acquainted with Langston Hughes, who co-wrote the play “Mule Bone” with Zora. There is a recording of an excerpt from the play on Zora’s official website, which includes the observation that folklore is not easy to obtain because rural people are inherently shy. According to a New York Times book review of Looking for Zora, in order to elicit information from evasive Southerners who were wary of her expensive car, Zora told them she was a bootlegger. This type of subterfuge was second nature to Zora and has made it difficult for researchers to get an accurate picture of who she was. Another way to interpret this is to acknowledge that Zora was a complex person who was as prone to evasiveness and self-protection as the people she was interviewing. For example, Zora often said she was proud to be from Eatonville, Florida, one of the first incorporated all-black towns, but there is evidence she was born in Alabama.

It isn’t difficult to find harsh, judgmental critiques of Zora and her work, but I was struck by an empathic passage in Rosemary Bray’s New York Times review of a play about her life: “ … [Zora] had no patience with what she called ‘the sobbing school of Negrohood’ that portrayed the lives of black people as constantly miserable, downtrodden and deprived. From her early education at Howard and Barnard colleges and her stunning popularity in the 1930′s, through the indignity of a false charge of child-molestation that, though disproved, ruined her career, Hurston was consistently, sometimes foolishly, herself.”

When Zora returned to Eatonville at the end of her life, she was still deeply misunderstood and without supporters. She died there and lay in an unmarked grave for more than a decade until Alice created a memorial for her and sparked a new appreciation of her life and work. Today there is a museum dedicated to Zora, as well as a festival and several awards in her name. Thanks to Alice, Zora is remembered and honored as the accomplished literary figure she was.

How it Feels to be Colored Me

Looking for Zora and Wrapped in Rainbows Book Reviews, The New York Times