A Day in New York City with Citibike

A couple of weeks ago I organized an excursion into New York City, built around a day pass I’d gotten from TravelZoo to use at Chelsea Piers. I’d heard about the swimming pool there and was keen to check it out.

The plan crystallized in my brain after a friend mentioned on Facebook that she had gotten an annual pass to Citibike. She is a serious cyclist, and I thought: if she can handle riding a Citibike, so can I. As a former triathlete, I’ve gotten used to only riding my “old school” steel Bianchi road bike that rides like a dream. I had it set up for my flexibility and body geometry; it’s comfortable because it fits me and any other ride pales by comparison.

In this instance though, I thought it would make sense to try out Citibike because they have several locations in areas that aren’t well served by the NYC subway. In other words, Chelsea Piers is located on the Hudson river, which is about as far west as you can go, and the closest subway to get there is several blocks away. 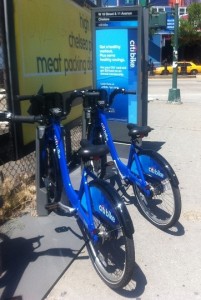 I took the ferry from Jersey City—one of my favorite ways to get into Manhattan—and took a short walk from the landing to the closest Citibike stand near the World Financial Center in Battery Park City. It took me a few minutes to figure out the system. I’d downloaded the app and read about the process, so I knew about using the kiosk to provide payment for a day pass with a credit card and to obtain a code to unlock a bike afterward. Despite my preliminary preparation, I was pleased that someone happened to be waiting for a free spot to park his bike: he was familiar with the process and made things easier. When I had trouble pulling the bike out of its parking spot, he told me to lift it out after the light on the code box turns green.

There’s a metal shelf on the front of the bikes with thick, sturdy bungee cords to secure a bag—very useful for running errands, or in my case, carrying swimming gear and toiletries when visiting a new gym.

My first thought was ‘This bike is heavy!’ My second thought was one of pure joy as I started pedaling on the nearby bike path: I didn’t have to worry about a secure place to leave the bike while I swam: I had identified a Citibike drop off spot on 18th Street and the West Side Highway, right across from Chelsea Piers. 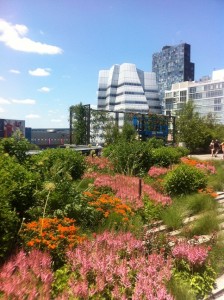 After my swim, I walked through one of the jewels of the city, The Highline and then over to Chelsea Market to grab a late lunch. I walked around, got a manicure, let it dry and then it was time to head over to Midtown to meet some friends for dinner. And—you guessed it—I was going to get to Midtown with my second Citibike of the day. As I was riding down a side street to get to the West side bike path, I noticed that the seat felt too low. While I was waiting for a stoplight to change, I found it was easy to adjust the seat to hip level—the optimum height to avoid discomfort and strain. It was much warmer and the bike still felt really heavy, but it was fun once I got going on the bike path. I ended up behind two other casual riders on Citibikes and I won’t say I drafted off of them—we weren’t going fast enough for that—but I stayed behind them until their pace slackened, and then passed them.

If riding on the bike path was pleasant and enjoyable, once I reached 50th Street and crossed over the highway to head east, the construction and traffic made me remember why I’ve never liked riding on city streets. It’s hectic and dangerous and I don’t trust drivers to share the road with us cyclists the way they should. I decided to walk the bike all the way over to the closest drop off area.

As I secured my second Citibike at a drop off just north of Times Square, a fellow rider walked up and said she was glad I was there because the other two bikes on the rack were locked. She said the red light was an indicator they weren’t available and probably needed repair.

Once more, I was grateful for this serendipitous live information exchange with a fellow rider. Reading instructions doesn’t always alleviate the hesitation and uncertainty we feel when we try something new.  My experience with Citibike underscored that instructions and illustrations on an app, website or kiosk are helpful but can’t address questions and solve issues the way a person can in real time.

Since I rented a Citibike, I’ve started to notice their distinctive royal blue color and sturdy frames everywhere. Have you ridden a Citibike, or do you use one regularly? What do you think of them?